A Sinkhole Appeared In My Yard. Now what?


When most people think of a sinkhole, they picture a collapsing road with cars and homes sinking into a giant pit.  While some sinkholes are viral Youtube video level disasters, the occurrence of a smaller sinkhole on your property is no less stressful.  We understand that sinkholes are a damaging eyesore to your lawn.  Depending on their severity, these holes can even compromise the safety of your family.  Large sinkholes are dangerous and can put your home’s structural integrity in jeopardy.  The causes of these pits can be even more serious.  Sinkholes can be caused by deteriorating structures beneath the surface of your yard or a serious ongoing plumbing problem.

Whatever its source, living with a sinkhole can be hard.  If your lawn currently suffers from the symptoms of a sinkhole, it can be fixed.  C.A. Taciak & Sons has three generations of experience remediating sinkholes in the Greater Baltimore Area.  Combining expert plumbing practices with masterful excavation skills, we are the professionals your home deserves.

If you are ready to start the sinkhole repair process for your property, do not hesitate to get in touch.  Schedule your consultation by calling Frank and Sam Taciak at (410) 960-2667.  If you are curious to know more about a C.A. Taciak & Sons sinkhole repair, take advantage of our guide below.

In this article you will find information on the nature of sinkholes as well as our repair process. Use the links below to quickly jump to a particular topic:

What is a sinkhole?

A sinkhole is a mysterious pit that appears in your yard.  There is no excitement in finding a sinkhole on your property.  A dreaded problem to come across, sinkholes often appear suddenly and unexpectedly.  They range in size from small and harmless to large and dangerous.  Often a sinkhole begins as a tiny hole in the ground and grows into a bigger depression.

Sinkhole pockets are usually formed by an underground cavity appearing.  It is common to see a sinkhole appear where a structure below the surface of the ground has collapsed.  Forgotten basements from long torn down homes may cave in.  Abandoned steel septic tanks have a tendency to rust through, collapsing on themselves.  Problems like these will create a hollow void in your yard.

Shifting geological structures can also produce sinkholes in your lawn.  Areas with naturally occurring cavities and caves may experience the appearance of sinkholes.  This type of geology is not uncommon under the sprawling landscapes of Maryland.

Sinkholes also appear when an underground drain line collapses, separates, or cracks.  When this happens, ground water drains down through the dirt and into the pipe.  The descending water pulls soil along as it sucks into the pipe, creating a sinkhole.  There is a tendency for this to occur around damaged sewer pipes, rain leaders, and septic systems.  Maintaining your home’s underground plumbing is crucial for preventing the appearance of sinkholes. 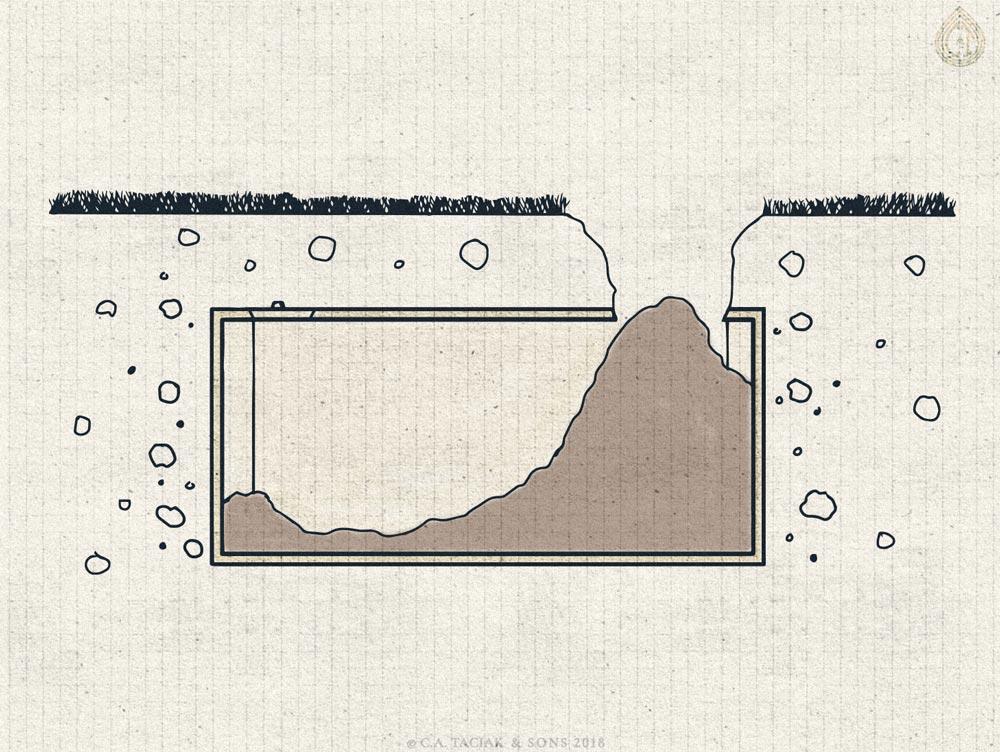 Repairing a sinkhole in your yard

The first step in the sinkhole repair process is determining what is causing the hole to occur.  Excavating the affected area will show the source of the sinkhole problem. Sinkhole issues are generally caused by:

If the discovery excavation reveals that the sinkhole is the product of a broken pipe, remediation requires a few steps.  First the broken sewer, septic, or rain leader pipe must be repaired.  After fixing the pipe, more dirt is added to replace the soil that had washed away.  In this way, the sinkhole is completely filled in.  It is then possible to tamp and sod the area.  Having resolved the source of the sinkhole problem, your lawn is restored and looking better than ever.

There is a different course of action when the diagnostic excavation shows that the sinkhole stems from deteriorating debris or a collapsing structure.  In these situations, the deteriorating or collapsing structure is further demolished and then a large “bean-bag” like filler is installed.  This large “bean-bag” is composed of gravel and geotextile fabric.  The fabric holds everything in place while allowing water to drain through the soil.  This prevents further expansion of the sinkhole and allows your landscaping to be restored above.

C.A. Taciak & Sons is able to provide our Baltimore neighbors with both of these sinkhole repair methods.  If a suspicious pit has begun to appear in your lawn, please don’t hesitate to get in touch.  We apply our 70+ years of plumbing and excavating experience to each sinkhole remediation project.

You may be wondering “how much does a sinkhole repair cost?”  As with most major home repairs, sinkhole remediation is an investment in your property value and your family’s safety.  We believe in being advocates for our homeowners.  We are happy to provide insight into the costs and processes behind plumbing repairs.

Sinkhole repairs start at a base price of $1,200.  This cost is the minimum for the heavy machinery operation required to do any repairs.  The repair price increases depending on the nature of the project.  Additional costs must be factored in.  Trucking in gravel, the specialized “bean-bag,” pipe repair, and tamping are all additional costs.  During the initial consultation for your home’s sinkhole project, we provide you with a possible range of final pricing.  All sinkhole remediation work is exploratory, so pricing is an estimate based upon what we expect to find once excavating begins.  However, we always strive to make sure that your sinkhole is the only surprising thing about your project.

Has an unusual hole appeared in your yard?  Shifting soil, damaged underground plumbing, or a collapsing structure may be the cause.  If a sinkhole problem is affecting your property, we are the experienced craftsmen your household deserves.  Please do not hesitate to reach out to either Frank or Sam to answer any sinkhole or underground utility questions you may have.  If you have determined that your property has a sinkhole that needs to be addressed, or are concerned that one may be developing on your property, contact us for a solution.

Will a sinkhole go away on its own?

No, a sinkhole will not go away on its own.  The underlying source of the sinkhole must be repaired and filled in for the hole to disappear.  While naturally occurring sinkholes are possible, most stem from a single source that can be pinpointed and resolved.  Collapsed structures like abandoned root cellars, rusted septic tanks, abandoned basements, and improperly filled in pools can all produce sinkholes.  Broken sewer, water line, rain leader, and septic pipe lines can also produce sinkholes.  Our expertise in both excavation and pipe repair allows C.A. Taciak & Sons to successfully eliminate both sinkholes and their sources for our clients.

Is it possible for a sinkhole to spread?

If left unresolved, it is possible for a sinkhole to spread.  As mentioned above, the cause of the sinkhole must be eradicated before the hole can be filled in.  Leaving the sinkhole untouched or improperly “fixed” can cause the hole to return, or worse, expand.  Large sinkholes are exceptionally dangerous.  A collapsing sinkhole can cause damage to the structural integrity of your home or other property.  Large sinkholes are often responsible for damage to foundations, patios, garages, pool houses, outbuildings, fences, decks, driveways, and cars.  In addition to structural damage, falling into a sinkhole can cause bodily harm.  The force of the displaced dirt can press in on your body and block your airways, causing suffocation. Falling into a sinkhole created by a damaged septic tank is the most dangerous.  The gases contained inside a septic system are highly toxic, and if immersed in them, asphyxiation will occur.  It is in your best interest to resolve your sinkhole problem as soon as possible to avoid unfortunate hazards.